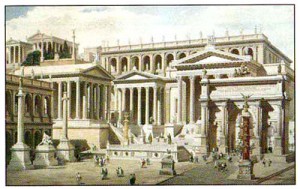 The Rolleiclub Forum has been the number one meeting place for Rollei,  Rolleiflex, Rolleicord users , collectors and friends since 2006.

Traditionally the Forum has been a ‘hangout’ for Philosophers , Artists, Intellectuals , Soldiers, Merchants and Photographers since the early days of civilisation.
The word Agora (pronounced ‘Ah-go-RAH’) is Greek for ‘open place of assembly’ and, early in the history of Greece, designated the area in the city where free-born citizens could gather to hear civic announcements, muster for military campaigns or discuss politics. Later the Agora defined the open-air, often tented, marketplace of a city (as it still does in Greek) where merchants had their shops and where craftsmen made and sold their wares. In Rome the Agora would serve in much the same way as it did in Greek city-states such as Athens but was known as The Forum (literally `the place outdoors’). As in Greece, the women frequented the out-door market to shop while the men would meet there to discuss politics or events of the day.

The Rolleiclub user Forum is your great meeting place ‘Not essentially Out-doors but definitely travels to you via Outer-space’ .