Until the end of the 1960s, all camera lenses were protected against reflections and flare with a single- or dual layer of coatings. After that time, lens makers applied a new technology of layered coatings to their lenses: Multi Coating. Carl Zeiss called it’s version of Multi Coating T*.
In a joint-venture with Zeiss, Rollei developed their own version of Multi Coating and named it HFT for High Fidelity Transfer. Remember, it was the time of High Fidelity being a big thing in Home Stereo development.

In 1972, Rollei started their own production of lenses under license from Carl Zeiss; this took place in the former Voigtländer Optical Works near the Rollei factory in Brunswick, Germany, which had been acquired by Zeiss and Rollei at the time. The German production of Made by Rollei lenses, and those made in Singapore, were all HFT lenses. Except for the fact that multi coated lenses bear the HFT sign on the front lens mount HFT lenses can be easily identified because they glow red and/or  dark green, as opposed to single or dual coated Zeiss lenses which have a golden and blue glow. A few Zeiss lenses have been sold with HFT coating not bearing the HFT sign on the lens.

Having HFT multi coating is only important when a small bright source of light strikes the front lens. In that case, the lens shows more of a grayish lens flare than the HFT version will do. Ghost images will also appear more visible. 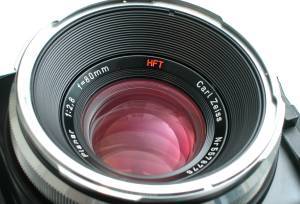 For Medium Format Photography, HFT is less important with lenses from 80mm to 1000mm, especially when the lens shade is used. For the 80mm lens, since the front element is safely recessed, and especially with the shade mounted, there is seldom a chance of flaring, but it is possible in certain situations. For the wide angle lenses, when shooting back lit and outdoors, HFT is better, especially with the big 40mm lens. The 30mm Fisheye, the 40mm Distagon FLE and the 60mm Distagon only exist in HFT versions, because they are designs released after 1972. For the 50mm Distagon, if you are shooting outdoors a lot, and against the light, HFT is a beneficial thing to have.
Keep in mind that the original Zeiss lenses with dual coating already were extremely good protected against flare, and according to some connoisseurs, the HFT coated lenses are believed to draw a little bit softer image.

Good advice: always use a shade, or, even better, a compendium shade.