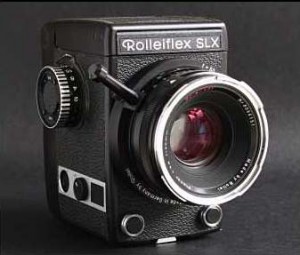 At Photokina 2002 Rollei presented the first autofocus 6×6 medium format camera in the world – the Rollei 6008 AF.  This is the most sophisticated camera in the 6000 series from Rollei. The 6000 series actually started with the Rolleiflex SLX back in 1976.  Although the camera wasn’t called anything with “6000” is was the birth of the 6000 models.  This article is not so much a review (or “historical review”) of the Rolleiflex SLX but more a description of the camera, how it was constructed and what makes it so interesting.

A short description of the SLX

The SLX is a single lens reflex (SLR) camera with interchangeable lenses with a shutter built in to the lens (leaf shutter). The film back can be removed and replaced by a 6×4,5 back or a Polaroid back, but the backs aren’t “interchangeable” (in the sense, that it can’t be interchanged with film in it). The viewfinder is interchangeable and a prism can be attached. There is a built in light meter and a shutter speed priority exposure mode.  The camera is fully electronic and only runs with a battery.

An all electronic camera 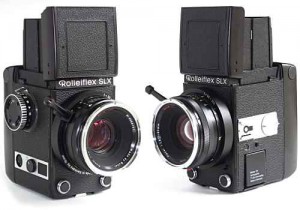 The SLX wasn’t the first single lens reflex from Rollei. Already at Photokina in 1966 the SL66 camera was presented. However, while the SL66 was a mechanical camera, the new SLX presented at Photokina in 1974, was a totally electronic camera. No springs or feathers. An electric motor runs the camera and a new electrical shutter was build into all lenses. This means that the camera is a “direct drive” camera not unlike what we know today from many modern electronic film cameras.

To make a fully electronic camera Rollei invented a new shutter with two linear motors built into the lens. Constructing a leaf shutter capable of at least 1/500 sec. and with a big enough aperture wasn’t easy but Rollei managed to construct a shutter with a diameter of 24mm and a maximum speed of 1/500 sec. The lenses contains two linear motors; one for controlling the shutter and one for the aperture. Later came an even faster shutter capable of 1/1000 sec. or a bigger diameter (34mm) for a larger maximum aperture. 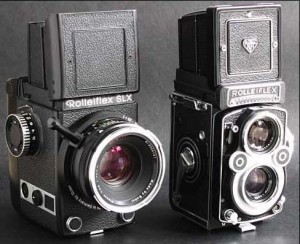 If the TLR’s are workhorses, the SLX is a tank. It’s outer build quality is extremely high and it seems very rugged. The lens bayonet is big and strong, the viewfinder is also bigger than on the TLR models. Loading film is a lot easier, thanks to the quick load insert invented by Claus Prochnow. When used on a tripod, it’s still easy to load a new film, as opposite the TLR models, which has to be removed from a tripod before new film can be loaded. There is a lot of design familiarity with the TLR. In use it is quite different from the TLR of course. Focus is on the lens barrel and shutter speed is selected via the dial on the right. 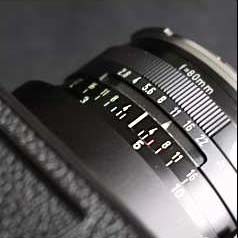 The aperture indicator on the lens

As mentioned above, the SLX has a built-in center-weighed meter. Light can be measured by pushing the rectangular black button on the right side below the speed dial. This will also cause the aperture to be stopped down and the photographer can get a depth of field preview. This is a great advantage compared to the TLR’s were there is no depth of field preview (well, you can actually get aperture blades to attach to the viewing lens, but that’s more difficult to use). If the picture is still going to be either over- or under- exposed, two LEDs will turn on inside the viewfinder, indicating in what way to turn the speed dial in order to get correct exposure: 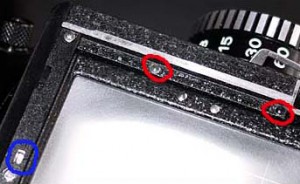 The blue ring on the picture above shows the position of the battery LED. When it lights up, it’s time to recharge the battery.

Battery The SLX takes a 10V rechargeable NiCd battery which is good for about 1000 frames when fully charged. Lenses Quite a large range of lenses are available for the SLX from Rollei, Zeiss or Schneider. Personally I only have the standard 80mm Planar f/2.8 from Carl Zeiss. But lenses ranging from 30mm to 1000mm are available used or new. Some of the new lenses can not be used on the SLX. The so-called PQS with the fast 1/1000 shutter can not be used on the SLX.   A few interesting Schneider Optics lenses

All exceptional fast lenses and which are supposed to be of very high quality. Electronical/Mechanical failures The first models of the SLX (the “original model”) seems to have a reputation of being rather failure prone when it comes to the electronics. A cure for the camera seems to use the more reliable  electronic spare parts from the very similar 6002 model.