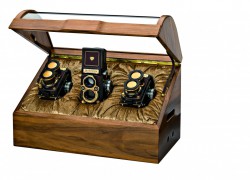 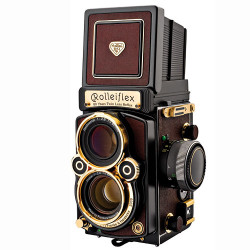 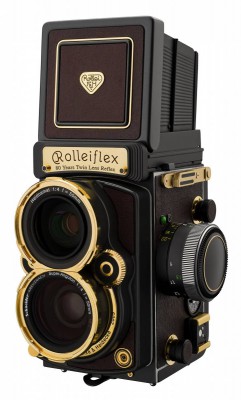 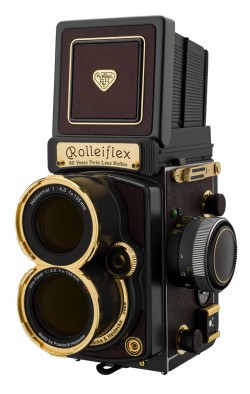 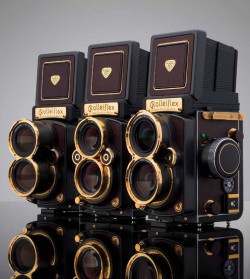 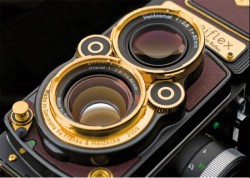 In 2009 the Rolleiflex Celebrated 80 Years in Production.

When the 6 x 6 twin-lens Rolleiflex was launched in 1929, it was an instant success – an ingenious camera principle that made the names of Rollei / Franke & Heidecke world-famous almost overnight and became a legend in its own right.

For the professional photographers of its time, the twin-lens reflex by Franke & Heidecke was an absolute “must”. And wherever in the world there was an event that would determine the course of history, its images were captured with a Rolleiflex – because there was no magazine or photo book that appeared without Rolleiflex photos.

It inspired many another camera development, while others became possible only because of it. In the decades that followed, innovative designs by the Franke & Heidecke Rollei company time and again gave new impetus to photography and pointed the way to the future.

For the Occasion a beautifully crafted , gold-plated set of the Rolleiflex FT , FW and FX was made in limited quantities.

In the anniversary year 2009, Franke & Heidecke commemorated the sensational success of their twin-lens Rolleiflex. In memory of this pioneering feat of camera building, this legendary camera was made available as an exclusive set of three in a special edition of only 80 units.

Buy the unique Rollei TLR book , compiled in the 1980's by a enthusiast group of Franke & Heidecke employees . Showing historic photos and data of all Rollei TLR cameras. Now available as printable PDF download. Click to see a sample page and to buy the book for only $9.95 , which fully supports the Rolleiclub web site.
Rollei TLR Book

In this digital age we are used to online user reviews.
In the 1900's though we had to surrender ourselves to Sales brochures, clever Sales people and Word of mouth to decide what Camera to buy. I thought it to be nice addition to add a review option to each Rollei Gear Page.

Please submit your review based on real life experiences under your own name. Genuine reviews will be published ,  irrelevant (advertising) messages will be deleted without notice. Email addresses will not be published and may be used by me to contact you for more details.