The International Rolleiclub.com was created at the dawn of the internet – in 1999 – a Rollei enthusiast in Beverly Hills – California USA realised the power of the internet at an early stage. He put his extensive knowledge about everything Rollei online for all to enjoy. For many years Rollei aficionados all over the world enjoyed his labor of love. Mysteriously the site disappeared from the net in 2005. But in 2006 the web site was recovered by a Professional Photographer from The Netherlands  living in Australia. He used to work full time with the Rolleiflex TLR at a young age and later used the SLX and 6000 series of cameras in his studio he also visited the Franke & Heidecke factories in Germany. His passion for photography , Rollei , Graphic Design and Web Design all came together in this web site. In 2014 he set off the re-create the web site all over again.

The Rolleiclub forum has been active since 2006 , at this moment the forum has over 2500 subscriber from all over the world. The forum gives answers to questions that may be simple for some but can be daunting for others. This Rollei community bridges a gap between the new ‘digital generation’ and ‘us’ the older ‘film generation'. It is our aim to keep that vast base of knowledge available for new ‘digital generations’ to learn about that ‘old film technology’.

I hope many more experienced Film based Rollei users will join and remain active in answering questions about these fabulous Analogue Instruments : Our beloved Rollei Cameras

In a Responsive* design  this rejuvenated web site now (September 2014) accommodates all modern devices: from Desktop PC to Mobile phone, this is what you are looking at right now: Rollei , Rolleiflex , Rolleicord , Rollei35 all united with their loyal users in a forever young Rolleiclub.com.
*) Responsive’ design: A web site fluidly accessible by any device (from Home Computer or Mobile Phone)  that can display web-pages.
This Web Site aims to provide a complete overview of ‘all’ Rollei products made. Such as the famous Rolleiflex TLR (Twin Lens Reflex) Cameras or the Rollei 35 Classic – The masterpieces of mechanical engineering the Rolleiflex SL66 alongside of its its hyper modern sibling the Rolleiflex Hy6. The Rolleiflex TLR series and the Rollei 35 Classic models are the longest running production Camera models in History , although gradually upgraded since the first models produced in 1931 and 1966  its very basic technical designs and appearance remained the same.The only other camera model that remained that close to its original roots is the Leica M6 although not as close to the Ur-Leica it has a very close resemblance to the 1954 Leica M3, quite another achievment and proof that German enginering often got it right at the first ‘go’ . Rolleiflex production actually began with two stereo cameras the Heidoscope – Stereo Photography was a great passion for Heidecke . But the real commercially viable production began with the Rolleiflex 4×4 , soon followed by the 6×6 format. This 6×6 cm 0r 2.54″ x 2.54″ remained the main stay of professional film formats, even after digital took over since the early 2000′s it remains a popular choice by professional and amateur photographers world-wide. The Rollei 35 was and is perhaps the most beloved compact 35mm film camera ever since its introduction in 1966. 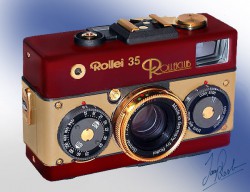 Often I wonder if a identical digital version of that mechanical masterpiece would be as popular now as it was then ? 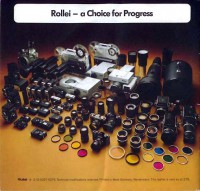 Rollei Product Range in the 1980’s

On the Rolleiclub Forum one can see how popular virtually every Rollei film camera is :

From the early Rolleiflex Cameras , the Rolleicord , Rollei-Magic , Rolleiflex Automat to the Rolleiflex E and F series , followed in 1966 by the sensational Rolleiflex SL66 and when everyone thought it could not get better the genius German engineers in Brunswick ( Braunschweig ) delivered us the Rolleiflex SLX with the linear drive motors in the lenses, later followed by the Rolleiflex 6006 and Rolleiflex 6008 . I still remeber a Rollei sales representative at the PhotoKina in Cologne ( Köln ) saying at the time “Hasselblad is dead” , little could he foresee that Hasselblad although perhaps a less advanced camera had a much better marketing and sales network , the rest is history… But just when we thought that the Twin Lens Reflex was dead the factory , by then renamed into Rollei Werke produced the Rolleiflex GX Camera, based on the famous Rolleiflex F but improved to modern standards which has since been manufactured in many fashions and right now we see another revival of the 6×6 format TLR in the new Rolleiflex-FX  , Rolleiflex FW and Rolleiflex FT Camera Series  and as if that is not enough:
Those same ‘former’ Franke & Heidecke engineers brought us the ultra modern Hybrid ( Film / Digital ) Rolleiflex Hy6 , which after a difficult start is gaining ground as the last professional camera of genuine European heritage making its way to studios and photo locations world-wide.
Some may say ‘hey , Hasselblad is European too !’ , true and not true , as not all manufacturing is done in Europe anymore. Unlike Rolleiflex and Rollei-35 which still maintains the entire production under one roof. Albeit in name no longer Franke & Heidecke or Rollei Werke it is still located at the same premises as ever and still has the same devoted employees as ever just the business name had to be changed for legal reasons : DWH Fototechnic crafters of professional Rolliei and Rolleiflex cameras. 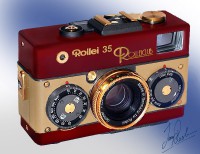 Let’s not just focus on the 120 or 6×6 format: Rollei made headlines in 1966 as-well with its first 35 mm camera the Rollei 35 , still in production as a valued collectors camera in a wide range of precious metals.

Besides of that Rollei made the still sought after Rolleiflex SL35 series and a series of extremely innovative 35mm SLR cameras, the  Rolleiflex 2000 and 3000 series. To complete the picture the company built a range of slide projectors from  basic to  highly advanced digital controlled designs in both 35mm and 6×6.

Less known is Rollei’s brief but serious activity in Rollei-Studio Lighting systems and tripods. The brand name Rollei nowadays is used for the marketing of many consumer digital cameras, tripods, camera bags etc. with the last addition of the Rollei 50S ActionCam the company is till going strong.

Little known fact is that Franke & Heidecke produced its own lenses.

In the web site one finds many targeted Ebay links , they are all the result of many hours searching for fine tuned key-words to achieve the best results when searching for a specific Rollei or Rolleiflex or Rolleicord item.

These links will save you an incredible amount of time , as each link takes you with only one click to the largest number of specific search results possible.

Whenever you go to Ebay you are encouraged to use the links provided in this web site as the advertising revenue pays for the design , maintenance and web hosting of ‘Your Rolleiclub’.

Chronological Overview Page of All Rollei

This section shows a chronological over view of everything Rolleiever made. It is a work in progress ! An ambitious work that -hopefully- one day will be complete. Gradually the contents of the huge database in the Rolleicub archive will be transformed into an accessible overview on this web site.

As it can become daunting to look at everything Rollei on one page – Rest assured :
Each Library Category will be placed get its very own section. So if you are looking for information about only  the Rollei 35 Cameras you need not to look first at every Rolleiflex Camera or Lens ever made.

Please be patient , I try to add sections on a regular basis.

Besides a chronological overview each equipment page shows the technical data of each model:

To access the Technical Data please click on the  'Read More' symbol under each Camera introduction. The full description will appear in a overlay on the same page, close by clicking anywhere outside it.

Rolleiclub created a unique "One-Click-Find-Now" on eBay, this takes you directly to an advanced targeted search for  THAT CAMERA MODEL ONLY !! On average one can find some 12000 ( yes Twelve Thousant ) listings at any given moment for anything Rollei. Imagine the time you save when you  search for this specific Camera Model : One Click Only gets you all the relevant listings - World Wide ! 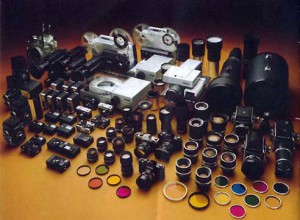 The Rollei Range of Photographic Products was in the 1980’s possibly the largest product range of any Camera manufacturer in the World.

With a continuous production of High Quality Photographic tools since 1921 the Rollei Library is a huge one. At the time of re-building this web site, in 2014, I opened the Library with the section of the TLR Cameras. These after gave Rollei it’s ‘face’.

Since the new (2014) web site is built in a database structure it is much easier to add new sections as in the old 2006 design(sadly enough never completed).